Excellence in building your dreams!

Village Heights Community
Are you interested in small-town living with an almost non-existent crime rate, which is 30 minutes from downtown Syracuse and 10 minutes from Auburn?  Check out Village Heights in the Village of Weedsport!   The lot prices are very affordable, many have views and capabilities of walk-out basements. There’s a historical Erie Canal park a short walk across the street.   Click the links for more information and photos, or click the “Where to Build” tab in the menu above.

Micron Technology, Inc. has chosen Central New York!
It was just announced the first week of October that Micron has chosen a site in the Town of Clay to build a computer chip manufacturing campus that will be the largest private investment in New York State history and one of the largest in the USA, if not the world.  What this means is huge growth in the Central New York area.  Not only will Micron employ thousands of people, but the support industries to Micron will be investing also.  It’s been said that in 20 years that this area will be similar in size to Charlotte, NC.   This will mean a housing market that will be gearing up to house all the people that will be required by Micron, its suppliers, and all the construction people that will be coming in to complete these factories.  More to come!

Thinking of building? Want to know how? Now is a great time to learn, plan and design a new home with us, virtually!
If you have been thinking about possibly building a new home or want to know if you can, now is a great time to do it!  In-person or VIRTUAL!  You can speak to us from the comfort of your home via your computer or iPad!  We have many plans and photos here on the website, but we have many other plans and photos to show you in person or at a virtual meeting.  Some of the plans on this site have been built in several different configurations and one of those may interest you.  We can also create a new home design.  Give us a call at (315)374-4531 and we can schedule a time.  Prepare and plan now before interest rates go up!

"We're just as friendly after the build, as we are in the beginning!"

Are you looking for a little more ammunition to convince the spouse to build a new house?  Here’s some of the reasons and benefits of building new!  The time is right and interest rates are still low!  Learn More

Martin Custom Homes tries to help out in the communiy when we can.  See some of the projects we’ve helped on.  (Just setting this up as a new section. More to come as time permits.)  Learn more

Bring your own plans or select from one of our many floor plan designs – we will customize to suit your needs. We build in all price ranges!  Learn more

See the information on some of the lots/sub-divisions available now, or get more information about building on your own lot or land. Learn more

What separates Martin Custom Homes from the other builders? Call it old school if you like, but at Martin Custom Homes we feel that certain features shouldn’t cost extra. Attention to detail, although hidden from sight behind walls, is just as/or more important than features that are readily visible.  Learn more

Want to learn a little more about Dave and Andrew Martin?  Click here to read our history.  Learn more 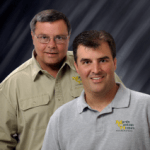 We can tell you a lot about ourselves, but it’s better for you to hear it from clients we’ve built homes for.   Read here what a few of our customers had to say.  We also have no problem giving you names of any of our many clients, so  you may speak to them for assurance that you are talking to the right builder.    Learn more